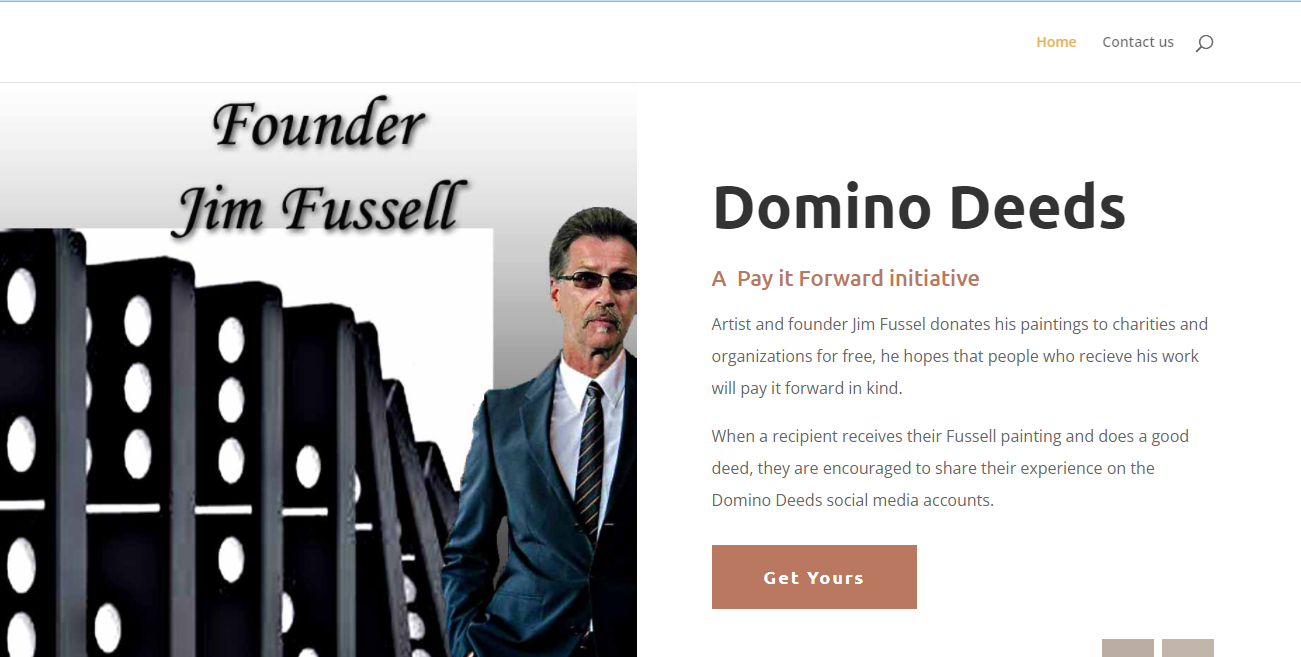 Following up on my blog post about Domino Deeds and Jim’s amazing initiative of paying it forward, I’m very happy to share the results of my presentation of Jim’s paintings and Domino Deeds in school.

If you missed the information, Domino Deeds was started by Jim Fussell who has donated over 10,625 paintings to countless charities and causes. Those non-profits have auctioned these paintings off to raise funds for their organizations. Many people have also kept a painting and in exchange they did a good deed for someone else, thus initiating the domino effect of good deeds.

Last week, I talked about Jim and Domino Deeds in my social science class, and my students were very interested. The stories moved them and they had many great comments and questions. At the end of my presentation I did a painting lottery and everyone was excited about getting a painting. There were several landscapes in different seasons, each one unique and signed by the artist.

Ideas began to take form, and some students were telling me what they planned to do and which charities they wanted to help.

Over the course of this week the reports of their good deeds have been coming in, and they all did beautiful things. Some kids even went the extra mile and came up with stunning ideas that just blew my mind.

With their permission I’ll share a few of the success stories here below.

“For this project, I believed the best thing would be to help someone, or a group of people, in such a way that it was effective, but also meaningful. In order to pay it forward, the last thing that I believed would come to mind was to send it back. Not literally, but sometimes paying it forward might be to do something for the person behind you, by sending a good deed back. No, not back to the teacher, or to the classmate behind me, but instead to a random person, or maybe even a family. (Let me explain)

With some creative thinking, the most creative idea I could think of was the most ironic. To pay it backwards, literally. By paying it backwards, I was to pay for the person or family behind us, at a restaurant. Therefore, I went to the best place to do a good deed, a drive through (two in fact). First, I went to Carl’s Jr, a fast-food restaurant next to the movie theater. With tons of people, we went through the drive-through lane and told the cashier at the window what this project was about. A few french fries later, a car pulled up behind us. With this, the cashier gave us the total for their order, paid, and asked the cashier to give them a card. Also, we took a photo with the painting, and gave a domino to the car behind us.

This card was to remind them to keep spreading the deed, and we hope they paid for the people behind them as well!

Finally, we went to a Starbucks drive-through. Although it was not as busy, we explained to the cashier what our mission was, to do a good deed for the car behind us. However, since there were no cars, we waited just around the curb for the next customer. Upon his arrival, I hurried to the cashier in order to pay for the customer’s drink. I asked (respectfully) if the cashier could give the card and a domino to the customer, as a reminder to keep on paying it forward. 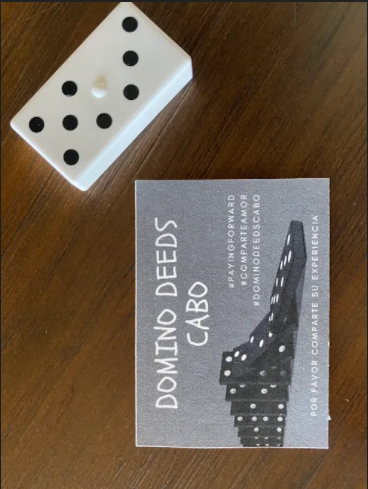 In conclusion, I hope I created a domino effect, or even a ripple effect among those people. Not only was it the ones who received the deed, but also the ones who participated in making it happen. In this case, the cashiers played an amazing role in this project, where not only did they get to view the happiness in their faces, but also feel a warming in their heart. Like a motivation inside them that (hopefully) will inspire them to do the same.” 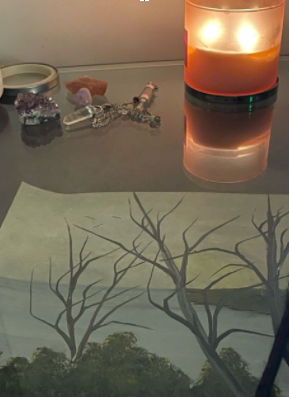 Ellie (I copied part of her report, not everything)

I thought about what I really wanted to do with the painting for a while, and while thinking about it I put it on my desk so I could be reminded of it every day. While I sat at my desk I kept looking over at the painting and was reminded again and again of the significance and story the painting told. It reminded me to be kind and give everything I could day after day so for that reason I decided to keep it. If I ever meet someone who I feel like needs the painting more than I do, I’d gladly give it to them and tell them the story of this painting.

The day I got the painting I had tutoring after school and in the middle of the session 2 people came up to me and said they were fundraising money for kids who wanted to do sports but didn’t have the funds to do so. They had a small selection of items you could buy like chocolate or candy but I told them to keep everything and I gave them everything I had on me. It was only 100 pesos but I think that even small payments like that help in the long run. 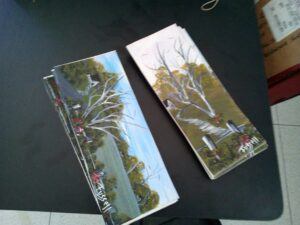 In conclusion, this painting has taught me a lot more than just doing good deeds, for me it’s facing every problem with a positive mindset and outlook. Even though some of these deeds are on a smaller scale, I think it is important to work your way up to deeds that might take some more time, for example I want to foster some dogs when I’m older which I know requires money and my own space which I don’t have at the moment. This painting makes me think about the future positively in a way though, as I get to think about doing greater deeds later in life.”

There are many more beautiful stories. One boy bought a guy who always hung around a local store an energizing drink every day. The guy was very grateful, and they began to build a rapport, chatting a little every time my student went to the store.

One student made French toast for his classmates and another student gave cupcakes and cookies to one of the cleaning ladies in school on Valentine’s Day. One girl bought the security guard at school an ice cream 🙂 Another girl went to help someone to feed his dogs.

One student donated her clothes and gave a one-legged man who was asking for donations $500 Mexican pesos (approx. $24 US) and she also bought him something to drink; and another girl went to a local kids charity and donated toys. A girl who was sincerely touched by Jim’s initiative enlisted her mother to help her cook a full meal for a local charity that helped children of low income families.

I’m touched by what they came up with and I’m really proud of them. Words cannot express how I feel about what my students did to pay it forward. I’m grateful for having been part of this great initiative. Jim (the artist) had tears in his eyes when I sent him reports of the students’ good deeds.

I will end this article with his words as it feels like the perfect way to do this (and I’ll send Jim a copy of this article – and if you’ll allow me – with your comments. (just let me know in the comments below if I may share your thoughts with Jim) 🙂

“So heart touching. I am such a softie, teary eyed as I read their words.”

“Your students’ stories will touch the hearts of potentially thousands if not more people.”

“The kindness all of these wonderful students are exhibiting, they are simply born with. Maybe Domino Deeds presented an opportunity to show by example what already exist in your individual beings. I am so proud to hear these stories and each student is giving me fuel to continue doing what I do on my end. Each of you make Domino Deeds relevant.

The kindness of Alex, giving another person a flavored drink as he stands outside the Oxxo store, and having conversation with that person, those interactions are priceless and who can say just how Alex’s actions are touching that other person’s heart. That person will not always be standing outside looking in, one day he will remember how you befriended him and he will befriend someone else. Touching people’s hearts in any fashion is something they will carry with them for a lifetime. A simple hug, a sincere smile, a kind word, praise, acceptance, making people feel they are relevant.”

15 thoughts on “Good Deeds from Students – Domino Deeds in Schools”